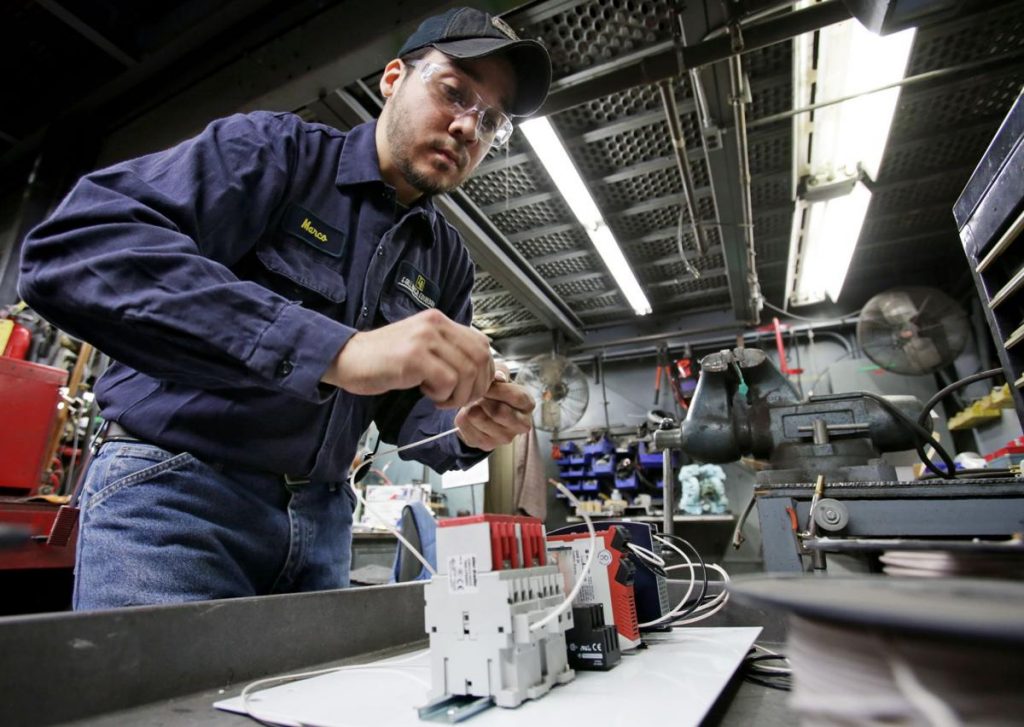 Marco Martell, an industrial electrician at Fall River Foundry, pre-wires a safety circuit on Thursday at the facility about 25 miles northeast of Madison. Martell’s work in communications electronics during five years in the Marine Corps gave him a foothold in the field of industrial maintenance after his service.

Marco Martell’s score on a military placement test qualified him to work in communication systems — an electronics-heavy field — and nudged him toward a booming job option.

“I’ve always had a little bit of an interest in electronics and electrical work,” Martell says. “It just kind of cascaded into this field, and it’s what worked best for me.”

After military service, Martell leveraged his hands-on expertise to enter a wide-open career field: industrial maintenance. Far from mopping floors and emptying garbage cans, industrial maintenance is increasingly high-tech and skills-based. These professionals learn to operate the systems that run large operations like hospitals and factories and manage the equipment that keeps them going. From running HVAC and lighting systems to machinery repair and programmable logic controllers (PLCs), industrial technicians need a range of modern skills in automation and robotics to run today’s operations.

What’s more, local technical colleges boast 100 percent placement rates for industrial maintenance graduates. Employers clamor to fill these positions as their businesses grow. In addition, retirements and a low supply of skilled workers are leaving a swath of positions open.

Madison Area Technical College estimates that in 2016, there were nearly 7,500 jobs related to industrial maintenance in its district, which includes Columbia, Dane, Jefferson, Marquette and Sauk counties and portions of Adams, Dodge, Green, Iowa, Juneau, Richland and Rock counties. It’s estimated that there will be another 225 jobs in the field by 2020, according to MATC data. But some 25 percent of the industrial maintenance workforce in those positions are likely to retire in the next five years, adding another nearly 2,000 openings in the field, the data show.

Wages for industrial maintenance workers in south-central Wisconsin start anywhere from $17-$20 an hour and top out near $30 an hour for experienced professionals, depending the company and position, according to data from the Bureau of Labor Statistics.

Martell, a 38-year-old Chicago native who now lives in Fond du Lac, spent five years in the Marine Corps stationed in Camp Pendleton, California, and Okinawa. Afterwards, he was qualified to work at a few factories in industrial maintenance. Since early 2016, he’s worked as an industrial electrician at Fall River Foundry, which produces castings and meters for utility companies.

“It’s satisfying — and it’s a challenge. But it’s always something different, so it’s a cool job to have,” says Martell, who typically works five 10-hour shifts a week.

Among Martell’s responsibilities are getting to the bottom of errors in production machinery processes.

“There’s a series of conditions that need to be met in order for a certain step to be continued,” he says, describing programmable logic controllers, or PLC. For instance, if a motor should start, a light should turn on or a conveyor should move in an operation, there’s a corresponding software command.

Because of these types of systematic setups, problem-solving is a key trait for industrial maintenance professionals, Martell says.

“You’ve gotta have a little bit of patience because problems aren’t always going to present themselves with solutions right away,” he says. “A little bit of ingenuity” goes a long way.

Employers have been known to work with current or prospective employees to support their education through funding or on-the-job training while they study.

Martell is starting some classes at Moraine Park Technical College in Fond du Lac to brush up on innovations in the workplace. He expects to carry four to six credit hours this semester, a combination of online classes and others that fit around his work schedule.

“The best thing about my job is the fact that there’s never anything really repetitive. Every time something happens and I get called to a machine, and I have to figure something out, it’s never really the same thing,” he says. “And you’re always learning something.”